What can lactose and starch do for an ODT formulation?

Oral application of drugs is not only the most common way for systemic drug application, it is also patient’s route of choice. Oral formulations are – compared to injections or infusions – convenient and painless. As they do not require sterility they are cost effective and reveal good patient compliance. But apparently even amongst oral formulations, there are favorites: Eli Lilly sponsored a study with the objective of comparing patients’ preference for olanzapine orodispersible tablets (ODT) with conventional oral tablets (OCT). After a 12-week randomized, crossover, multinational, open-lable evaluation, the result showed that 61 % of stable schizophrenia patients preferred ODT and the conclusion was that ODT should be routinely considered as treatment option.1

Moreover, there are some specific patient subgroups which naturally have more problems in swallowing conventional tablets then others: small children and geriatric patients. Not to mention those patients suffering from dysphagia for any other reasons. Taking this and the increasing world population of elderly people (16 %) into account, the increasing interest in ODT is explained easily.2

Besides the fast disintegration without swallowing, it is also important that those medicines are affordable and convenient to produce. Transportation and storage requirements should also be taken into consideration. All these topics are important to guarantee a good adherence to the treatment.3

When formulating an ODT, many factors must be taken into consideration. Talking only about the physical properties of the tablet, scientists have been working with high levels of superdisintegrants, effervescent agents, highly compressible diluents and binders, combinations of ion exchange resins and cyclodextrins.

Despite of the variety of techniques and formulations, there are always the same concerns when developing an ODT:

History and advantages of StarLac

In 2002, MEGGLE launched together with Roquette a lactose based co-processed excipient called StarLac®, composed of 85 % lactose monohydrate and 15 % maize starch. StarLac® has always been used as an excipient to grant fast drug release, but after performing some application trials, it could be demonstrated that StarLac® can be an innovative solution for the ODT market. With StarLac®, a robust production process, resistant and fast disintegrating tablets can be achieved. There is also an additional cost benefit deriving from the possibility to have good stability results without using expensive packaging material.

In order to better understand and determine the characteristics of StarLac® as a robust excipient for ODT application the study described in this article has been carried out. First, placebo tablets of StarLac® were prepared and submitted to an accelerated stability study. The aim of this evaluation was to avoid the interference of other components in the formulation so that a clear picture of StarLac®’s performance in ODT could be gained.

As a second step, a similar study comparing a StarLac® based formulation with the nonsteroidal anti-inflammatory drug Ketorolac tromethamine (Ketorolac) as model API and a Ketorolac formulation based on the polyols sorbitol and mannitol which are together with a disintegrant commonly used excipients in ODT formulations.

A co-processed excipient is a combination of two or more compendial or non-compendial excipients designed to physically modify their properties in a manner not achievable by simple physical mixing, and without significant chemical change. However, in some instances, formation of necessary components may occur, such as in-situ salt formation. 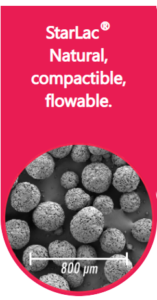 Three formulations have been designed for these studies. The first one was composed solely of StarLac® and a lubricant (Magnesium stearate). The other two formulations contained Ketorolac tromethamine and typical excipients for ODT as described in Table 1.

The mixtures were prepared by a Turbula Mixer T2F (Willy A. Bachofen AG Maschinenfabrik), with a 2 L vessel, running at 30 rpm. Mixing time was 10 minutes for all the components and additional 2 minutes after adding the lubricant.

The tablets were produced by direct compression using a pilot scale rotary tableting machine Piccola–D (Riva SA – Argentina), controlled by the software “The Director®“ (SMI – USA). Compression was performed using a gravimetric feeder. For the placebo tablets, a 8 mm circular, concave punch was used, stettings of machine were adjusted to obtain tablets of 170 mg and 80 N hardness.

For the Ketorolac containing tablets, a 7 mm circular, concave punch was used, approximating a tablet weight of 100 mg and tablet hardness of 50 N.

Placebo tablets were packed and submitted to an accelerated stability study at 40°C / 75 % relative humidity for three months for placebo formulations and six month for formulations with API, respectively. Physical analyses were carried out at starting point (T0), 1 month (T1) and 3 months (T3). For API containing formulations additionally at 6 month (T6).

Tablet weight: 20 tablets were individually weighed in an analytical scale and the average weight and the deviation coefficient were determined.

Tablet friability: 20 tablets were dedusted and weighed (w1), submitted to an ETHIK friability test apparatus according to USP-NF at 25 rpm for 4 minutes. At the end, tablet weight was checked again after dedusting of the tablets (w2).

Weight difference was determined and friability in percent was calculated according: (w1-w2)*100/w1

The stability of the placebo formulation was investigated by monitoring the parameters weight, hardness and disintegration over 3 month and 6 month for API containing formulations, respectively.

Figure 1a displays the weight [mg] of placebo StarLac® formulation, packed in PVC/Al blister, PVDC/Al blister and glass flask. Samples were analyzed at time 0, 1 and 3 months. It could be demonstrated that StarLac® tablets had not absorbed significant amounts of water during the 3 months storage time, independent of the packaging material.

It could be seen that the formulation using only StarLac® as filler/binder showed limited moisture absorption, independent from the packaging material. The  standard ODT formulation based on polyols (FAP) showed an increase in tablet weight due to moisture uptake strongly dependent on the packaging material. Highest increase in weight was observed for the PVDC blister whereas weight did not change significantly for tablets packed in the glass bottle. For taking the polyol based tablets out of the blister packages, aluminum foil had to be cut to avoid breaking the tablet during unpacking.

Figure 1a. Weight of placebo StarLac® tablets before, during and after storage.

Figure 1b. Weight of StarLac® and Polyol based tablets containing Ketorolac before, during and after storage.

Resulting tablet hardness of placebo formulations are illustrated in Figure 2a. No clear trend for the different packagings was observed.

Figure 2b shows results of tablet hardness investigation for the two formulations containing Ketorolac over 6 month.

Blank values indicate undetectable hardness by the machine. It could be seen that the formulation with StarLac® demonstrated less hardness loss along the 3 months when compared to the formulation with Mannitol and Sorbitol, which could only maintain a certain hardness when packed in glass flask. For the standard ODT formulation stored in blister packaging it was not possible to examine the result at all planned time points because the tablets were not stable enough to be transferred to the hardness tester.

Figure 2a. Hardness of placebo StarLac® tablets before, during and after storage.

Figure 2b. Hardness of StarLac® and polyol based tablets containing Ketorolac before, during and after storage.

Missing bars: detection was not possible as tablets are too fragile to be transferred into hardness tester.

Figure 3a and b illustrate results from disintegration analysis. For tablets based on StarLac® only (Figure 3a) a very fast release around 30 s was detected. After storage at 40 °C and 75 % relative humidity the disintegration time increased slightly for all investigated packagings. Tablets packed in PVC showed the longest disintegration time after 1 month which slightly decrease thereafter. Results for the tablets packed in PVDC and glass showed similar results after storage.

Results for API containing formulations are displayed in Figure 3b. StarLac® based Ketorolac tablets in PVC/Al blister presented a disintegration time between 40 to 60 s after 3 months during the stability study.

For standard ODT formulation based on polyols it was not possible to investigate the disintegration for all planned time points. Tablet hardness decreased to an extent, making it impossible to transfer them intact from the blister and quantify the disintegration time. For tablets stored in PVDC this was the case starting from 3 month time point and for tablets packed in PVC from 6 month, respectively.

It could be shown that StarLac® based tablets fulfilled at all storage conditions requirements of the European Pharmacopoeia for ODT disintegration (tablets must disintegrate within 3 minutes). The standard polyol-based formulations fulfilled requirements initially but then lost physical stability during storage.

With decreasing stability, the tablet hardness decreased over storage time and with that also the disintegration time for standard ODT formulation.

Figure 3a. Disintegration of placebo StarLac® tablets before, during and after storage

Figure 3b. Disintegration of StarLac® and polyol based tablets containing Ketorolac before, during and after storage.

Missing bars: detection was not possible as tablets are too fragile to be transferred into disintegration tester.

Friability for StarLac® tablets without API is given in Figure 4a. Depended on the packaging material, the friability increased during storage. However, friability was always below 0.5 %.

Results are similar for API containing StarLac® tablets. The standard ODT formulation showed changes in friability during storage highly depending on the package material. Tablets packed in the glass bottle showed hardly any changes in friability over the timeframe of 6 month whereas tablets packed in PVDC and PVC showed hardness loss to an extent, making it impossible to transfer them intact from the blister and quantify the friability time.

For API containing formulations, the friability was at the beginning between 0.0 and 0.1 % for all formulations.

For the StarLac® based formulations friability was below 0.6 % at all time points and packagings.

Figure 4a. Friability of placebo StarLac® tablets before, during and after storage

Figure 4b. Friability of StarLac® and Polyol based tablets containing Ketorolac before, during and after storage.

Tablets were stored at 40 °C / 75 % relative humidity over 6 month. The influence of packaging material on tablet friability [%] was investigated. Friability was checked at the beginning, after 1 month and after 3 month of storing.

StarLac® alone proved to be a robust excipient for ODT application, presenting stable results for weight, hardness, disintegration and friability when submitted to stability study at 40 °C / 75 % R.H., independent of the packaging material.

When formulated with API and other excipients like sweetener and aroma, StarLac® ODT proved to be less sensible to the accelerated stability conditions compared to polyol containing formulations, offering the possibility to have a final formulation packed with the most economic packaging material the PVC-Aluminium blister.

StarLac® can provide important benefits to the pharmaceutical companies if the API does not show any degradation due to moisture. With StarLac® it is possible to achieve a faster development process, a robust formulation for a trouble free production process with less components, resulting in an overall more economic formulation and allowing for the use of the most economic packaging material.

Benefits for the patients are given by resistant tablets which do not break when pushed out of the blisters, by fast disintegration in the mouth, providing a good mouth-feel without a “sandy” sensation and by a high adherence rate.

Lactose and maize starch, two of the oldest and safest excipients on the pharmaceutical market, can generate impressive benefits when co-processed in StarLac®.

3(WHO Expert Committee on Specifications for Pharmaceutical Preparations; Annex 5 – Development of pediatric medicines: points to consider in formulation) ↩

How to register co-processed excipients (CPEs)